As you may remember, I reviewed Liane Moriarty’s previous book, What Alice Forgot, and recommended it to everyone I know. So you can imagine my excitement to read her latest book, The Husband’s Secret. I hate to post a negative review, but I learned a hard lesson. Just because you love one book by an author, doesn’t mean you will love every book by that author.

What Alice Forgot, was a sweet, poignant story of a woman trying to figure out what went wrong with her marriage and how to fix it. It followed one family’s story with flashes of memory between 10 years before and the present. The Husband’s Secret tells the story of at least three different families. It starts by telling each families’ story in alternating chapters. It ends with each families’ story intersecting. This method of storytelling has become an increasingly popular way to handle multiple characters and often multiple narrators or points of view, but to the average reader it can be confusing and tedious. Jodi Picoult did this successfully in My Sister’s Keeper. She used it as a way to tell one families story through the perspective of each family member. But I digress…

The cover of the book has this grabber:

“For my wife, Cecilia Fitzpatrick
To be opened only in the event of my death”
Cecilia finds this letter in a box of old tax receipts in the attic. She has no idea that it will blow their serene, suburban lives apart.

The letter is a Pandora’s Box in the sense that evil she had never known was revealed when she opened the letter. Without giving away the story, I will tell you this. When I finished devouring it, (Yes, didn’t like it, but couldn’t.stop.reading) I had to verbally process the story with my husband. As I finished, he was obviously disturbed, like didn’t even want to talk to me anymore disturbed. “Why would you read something like that, and why would you put me through it?”

If you spend some time looking at reviews on Amazon, you will see that my opinion is in the minority. But for the sake of mine and my husband’s sanity I will review carefully before reading another of her books. I still enjoy Liane Moriarty’s writing style for the most part and will probably follow her blog.

I am not usually one to seek out best sellers or read the latest fiction. I’m much more of a Jane Austen, or F. Scott Fitzgerald reader. If it has stood the test of time, I’m all over it! However, this summer my fiction reading went in another direction. A good friend who is in several book clubs recommended I read Where’d You Go, Bernadette by Maria Semple and What Alice Forgot by Liane Moriarty.

For starters, Where’d You Go, Bernadette is set in my backyard, Seattle. Maria Semple, not a native Seattleite, has a hilarious tongue-in-cheek running commentary about what she thinks of living here. The heroine, Bernadette, is a misunderstood reclusive artist (architect) whose life revolves around her daughter who is in a prestigious Seattle private school, and her husband who works for Microsoft. As the story unfolds we learn why Bernadette has become a recluse; when she mysteriously disappears, her daughter is left to piece together the answers through a collection of emails and letters.

Maria Semple’s writing style is reminiscent of a good girlfriend relaying a funny story. Time and again as my husband was driving this summer, I would read a passage out loud so he would understand why I was laughing in the passenger’s seat. Maria Semple may not be a household name, but her writing has most likely been in your house. She has been a screenwriter for many popular shows during the last twenty years such as: Beverly Hills 90210, Mad About You, Suddenly Susan, Arrested Development, Ellen, and Saturday Night Live.

Like most great reads, I mourned when I came to the end of the story wishing there were a sequal.

What Alice Forgot is a more serious, but no less enjoyable read. Alice, a successful and driven wife and mother, hits her head at the gym and wakes up ten years earlier. Not literally, of course, but she has forgotten the last ten years of her life. She honestly thinks that she is 29 and about to have her first child, rather than almost 40 and headed for a divorce. Liane Moriarty tells a compelling story of the difference ten years can make in our hopes, dreams, and loves. By the end of the book you are left questioning the title. Did Alice literally forget the last ten years? Or, over the course of ten years, had Alice forgotten what was really important to her? I would highly recommend this book for pre-marriage counseling or for those considering divorce or for anyone who is married for that matter. 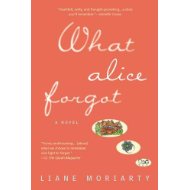 Images from Amazon.com where both books are available

Posted by kathryndean2013 on October 3, 2013 in Uncategorized